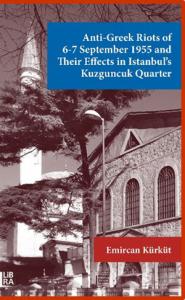 Kuzguncuk is a small, popular village in Istanbul near the Bosphorus. According to most official and unofficial written and oral documents, Kuzguncuk was a village of mostly Jews, Greeks, and Armenians rather than Muslim Turks up until the mid-twentieth century. In other words, the neighborhood is usually described by residents and in local and official discourses as a village of peace, harmony, and tolerance. These narratives create the identity of Kuzguncuk as a happy, peaceful and harmonic village. Kuzguncuk’s non-Muslim population started to decrease following the Turkification and homogenization practices of the Turkish nation-state such as Turkifying street names (the 1930s), the Capital Tax (1942), 6-7 September Pogrom (1955), the deportation of Greeks (1964), and Cyprus military operation (1974). Most of the Greeks and Jews were forcibly or voluntarily migrated to Greece and Israel. Specifically, the events of 6-7 September directly damaged Kuzguncuk’s non-Muslims because looters attacked several non-Muslim houses and shops. Unfortunately, recent statistics reveal that the current non-Muslim population of Kuzguncuk is only 1 percent of the total population of the village. Kuzguncuk lost its multicultural characteristic though Muslim Kuzguncuk residents hold up the multiethnic characteristic of the village in their nostalgic discourses. The general objective of this book is to unpack the historical facts of the Turkish Republic’s homogenization and Turkification practices via an analysis of the case of Kuzguncuk. In other words, this study is a memory work of one of the well-known villages of Istanbul.