Antisemitism and Conspiracy Theories in Turkey 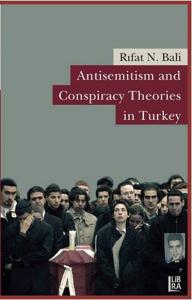 The official line that successive Turkish regimes have frequently repeated and which has firmly established itself in both Turkish and foreign public opinion is that the Republic of Turkey is one of those rare countries in which antisemitism has never taken root, and in which Jews have thus lived for centuries within a tolerant atmosphere of peace and tranquility, but it simply isn't true. Along with antisemitism are the conspiracy theories in which the “Jew” or the “Zionist” feature as the main actors that are widely seen throughout Turkish society..... In fact, this state of affairs is not only pervasive but has even become “normal” to the point of banality, so much so that it tends to draw no reaction from either the country's intellectuals or politicians. This book contains a collection of author's published articles on the subject—a subject that has received no serious treatment in Turkey, and as such attempts to fill the gaping hole in our knowledge of this widespread yet rarely discussed phenomenon and, as such, stands as an indispensible source for those interested in Turkey and antisemitism.