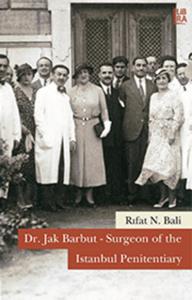 This works attempts to the reconstruct the life story of Jak Barbut, a Turkish Jewish doctor who, for several decades served with a tirelessly as surgeon general of the Istanbul State Penitentiary, the Or Ahayim Jewish Hospital and several others. Using the available sources the author brings to life the single-minded devotion of a man unanimously praised with equal parts gratitude and respect by his patients, his colleagues, and the convicts of the Istanbul Prison on whose behalf he devoted his entire professional life. As such, the work represents a modest but important contribution to the history of Ottoman-Turkish Jewry, and of Turkish medicine.

PART I - A BIOGRAPHICAL SKETCH

a) The Eulogy Published in the Turkish Jewish NewspaperŞalom

b) Eulogies Published in theJournal d'Orient

a) Eulogy of Albert Karasu

b) Coverage of the Funeral in the Journal d'Orient

c) The Ceremony at the Or Ahayim Hospital

d) Jak Barbut in the Novels of Kemal Tahir