American Foreign Missions to the Ottoman Empire: The Education of Armenian Women and Girls 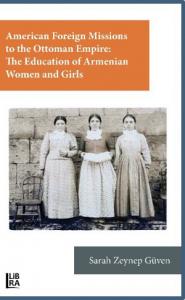 The American Board of Commissioners for Foreign Missions (ABCFM) was one of the first establishments to introduce a Western-style educational system to the peoples of the Ottoman Empire. This thesis is an examination of the emergence of interest in foreign missions among American women in particular, and the latter's contribution to missionary activities. It seeks to determine how and why educational facilities for Armenian females were established and their social and religious impact, largely from the perspective of the missionaries themselves. It looks at how contact with Armenians prompted adjustments in missionary approaches and policies towards educational missions. The notion of educated Christian womanhood entailed the championing of female education and a re-imaging of the role of women as wives and mothers. The promotion of female education facilitated new opportunities for Armenian women via teaching and evangelism. The central argument of this thesis is that American missionary activity significantly contributed to the increased interest in female education among the Armenian communities of the Ottoman Empire in the second half of the nineteenth century.