The Exiled – Erzurum / Aşkale The Diary of Konstanti N. Kurkcuoglu in the Labour Batallions of 1943 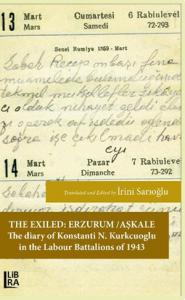 Konstanti N. Kurkcuoglu's diary is a very rare and special diary.This is not only because it is the first time such a testimony covering the twelve months of the labour battalions of 1943 in Turkey is being published, but also because the diary of Konstanti N. Kurkcuoglu describes in a direct manner the circumstances under which dozens of minority citizens who could not pay the tax on capital were obliged to serve in the labour battalions. Konstanti Kurkcuoglu's testimony records this period from the beginning (January 1943) till the end (December 1943). Immediately after the imposition of Varlıktax (November 1942), the businessand the house of Konstanti N. Kurkcuogluare seized by the Turkish state. In January 1943, unable to pay the tax of 200,000 Turkish liras, he is driven into exile, in the eastern part of the country (Erzurum), together with thousands of other Greeks, Armenians and Jews, where he works for a substandard wagetrying to pay the exorbitant amount of tax due from him. The capital tax law strictly forbade the right to court appeals. The handwritten diary of Konstanti Kurkcuoglu mainly records the everyday life of the exiled without unnecessary sentimentalities while making clear the insanity of this painful experience.