Turkey in the 1960's and 1970'sThrough the Reports of American Diplomats 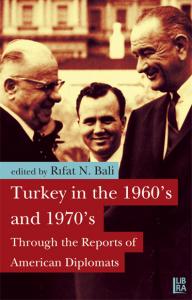 I- REPORTS CONCERNING THE POLITICAL AND SOCIAL SITUATION IN TURKEY

II - REPORTS CONCERNING THE SITUATION AFTER THE MAY 27, 1960 COUP

4-Report of Maxwell K. Berry, "Some Comments on the Political Attitudes of the Military", dated October 22, 1965.

2-Report by V.L. Collins, "The Minorities, Osmanlis, Levantines and Foreigners of İstanbul - Their Histories, Present Influence and Future", dated June 12, 1967.